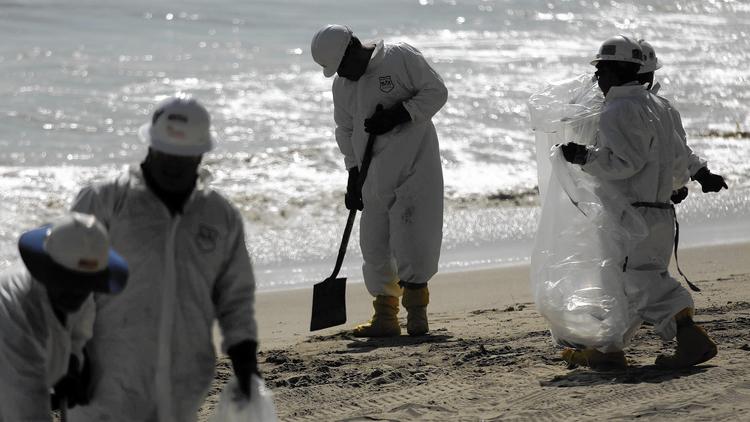 Federal authorities on Wednesday issued a cleanup order to the company whose underground pipeline last week spilled thousands of gallons of crude oil into the Pacific Ocean and marred several miles of Santa Barbara County coastline.

“Our action today is to make sure the oil response work continues until the Santa Barbara County coastline is restored,” Jared Blumenfeld, administrator for the U.S. EPA’s Pacific Southwest region, said in a news release.

The order from the U.S. Environmental Protection Agency and the U.S. Coast Guard requires Plains All American Pipeline, which owns and operates the pipeline, to continue its cleanup work on land, on the beach and in the ocean. It further orders the company to clean up all remaining contamination and to contain the oil to ensure no more crude is released into the environment.

The order also establishes time lines and cleanup requirements under the federal Clean Water Act. Federal officials say the move will ensure a prompt and thorough restoration of ocean waters and shoreline fouled by the May 19 spill near Refugio State Beach.

By June 6, the company must submit a work plan and detail how it will sample the air, water, rocks and soil, the order says.

The action comes as an ongoing cleanup operation has swelled to nearly 1,000 people, including federal and state employees, environmental contractors hired by Plains and trained volunteers.

Plains on Wednesday also continued a slow-moving excavation of the soil around the section of pipe that broke, action required under a separate order issued Friday by the Pipeline and Hazardous Materials Safety Administration. That order forces the company to remove the portion of pipeline for testing to determine what caused the spill and the condition of the pipe when it failed.

The latest order comes two days after Plains said it will also investigate the integrity of pipeline at four other locations along Line 901. The pipe transports crude oil 11 miles from Floras to Gaviota and then to refineries throughout Southern California.

The spill released as much as 101,000 gallons of crude from the pipeline, according to the company. An estimated 21,000 gallons of oil flowed downhill from the spill site through a culvert and into the Pacific.

Investors are starting to take note as well and the industry is starting a strong pushback against the LA Times story.  See this story from the Houston Business Journal:

Plains All American Pipeline LP has had to defend its safety record to a public concerned with the environmental impacts of its oil spill resulting from a pipeline rupture off the coast of California, but investors are watching too.

The price per share of Plains All American LP (NYSE: PAA) stock has slipped ever since the fiasco began, but up until now, much of that trading can be attributed to retail investors who tend to be more reactionary and a bit less sophisticated, said Sunil Sibal, director and master limited partnership analyst at New Orleans-based Global Hunter Securities LLC.

Safety records matter in that they can indicate more intrinsic problems than any isolated incident, but Sibal is fairly confident of Plains’ capabilities.

There was much media fanfare over the fact that Plains’ ranked fifth in the number of incidents or infractions reported to thePipeline and Hazardous Material Safety Administration, which has a database of roughly 1,700 pipeline operators, the LA Times reported.

Plains spokesman Patrick Hodgins has since come out and defended its record to media by reiterating that Plains is one of the largest midstream operators in the nation, and operates substantially more pipeline than many other companies in the PHMSA database.

Students in the News

Week 1: The oiling so far