Posted September 4, 2015 by admin under News 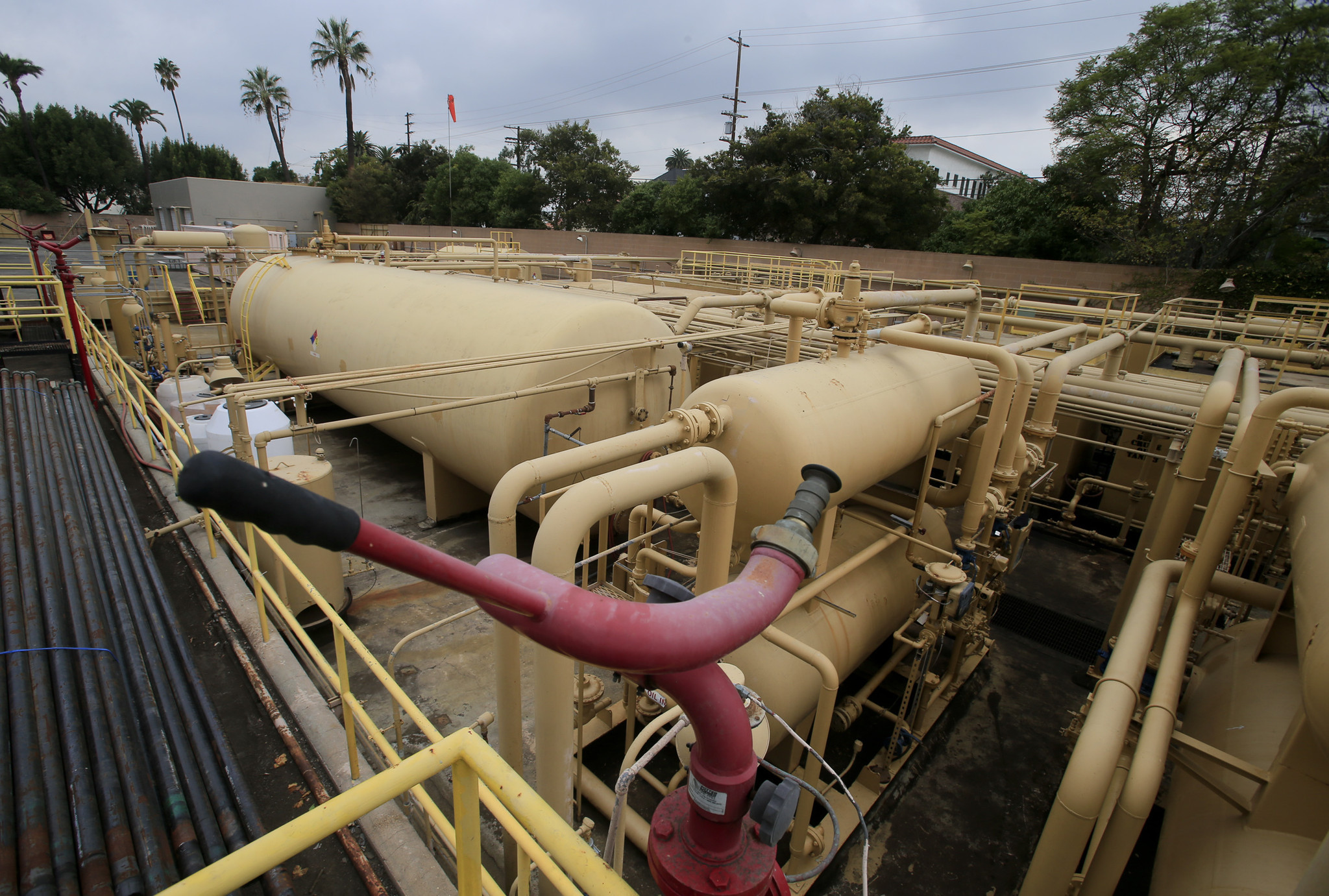 We have seen a spate of complaints about air quality near our urban oil fields here in southern California over the past few years.  This appears related to increased use of hydraulic fracturing methods to free up oil and gas and so increase yields from what have become relatively low production, “exhausted” fields.  I am often amazed to see the lengths production companies have gone to in the hope of camouflaging oil derricks and pipes from the casual observer and how frequently locals are unaware of what is going on in their neighborhoods in the context of oil and gas production.  Apparently that visual hiding hasn’t worked when it comes to offensive odors and air quality.

Our regional Air Quality Resources Board has just passed some additional restrictions on production facilities proximate to residences in the urban cores of the Los Angeles metroplex.  Urban petroleum production in California was already subjected to some of the tightest regulations in the U.S. and these additional emission rules further restrict what can be done by these production facilities.

A report last month from the California Council on Science and Technology does a nice job proving an objective overview of these urban oil fields:

The development of these [urban oil] fields, contemporaneous with the growth of the city [of Los Angeles], has caused conflict for nearly a hundred years.  Though oil production has been declining for years, there have been reports recently suggesting the possibility of additional large-scale oil production enabled by hydraulic fracturing…Although the oil and gas sector contributes a minor percentage of the total air pollution burden in the valley, the concentration of these air contaminants can be much larger near the wells that are a source of emissions.  Exposure to toxic pollutants from production wells depends on how close people are to the wells…The future of oil production in the urban environment, including that enabled by well stimulation, has potential implications for human health…

The Los Angeles Basin is unique in its exceptional natural concentration of oil directly beneath a dense urban population.  In few other places in the world has simultaneous petroleum development and urbanization occurred to such an extent.  Conflicts of oil and city life are not new to Los Angeles, but recent reports suggesting the possibility of additional large-scale oil production enabled by hydraulic fracturing, coupled with the ever increasing encroachment of urbanization on the existing oil fields, lends a particular urgency to the need to understand the public health implications of having millions of people who live, work, play, and learn in close proximity to billions of barrels of crude oil…

Beneath the city of Los Angeles is a deep geological basin with all the components and timing of a nearly ideal petroleum system.  As a consequence, the basin has one of the highest known natural concentrations of crude oil, located directly beneath a modern megacity.  Petroleum has been exploited in Los Angeles since prehistoric times, but more than 90 percent of the known oil was found during a 15-year flurry of exploration in the first half of the twentieth century.  Petroleum development and urbanization have gone hand in hand and been in conflict since the beginning. In spite of intense development, large quantities of recoverable oil probably remain.  Besides known oil, the basin has resource potential in three categories: (1) Relatively small volumes of oil in undiscovered conventional oil fields, (2) Large volumes of additional recoverable oil in existing fields, and (3) The possibility of unconventional “shale oil” resources in Monterey-equivalent source rock systems near the center of the basin.  Extensive development of any of these resources with existing technology would entail conflicts between oil production and the needs of the urban population.  Therefore, technological innovations would probably be required for large-scale additional petroleum development in the Los Angeles Basin.

…and the health risks associated with this mix of people and oil appear to mostly be associated with oil drilling activity in general and not fracking per se (note I have added the bolding for emphasis):

With few exceptions, most of the documented air pollutant emissions of concern from oil and gas development are associated with oil and gas development in general and are not unique to the well stimulation process.  In the Los Angeles Basin, approximately 1.7 million people live, and large numbers of schools, elderly facilities, and daycare facilities are sited, within one mile of an active oil and gas well—and more than 32,000 people live within 100 meters (328 feet) of such wells.  Even where the proportion of the total air pollutant emission inventory directly or indirectly attributable to well stimulation and oil and gas development in general is small, atmospheric concentrations of pollutants near oil and gas production sites can be much larger than basin or regional averages, and can present risks to human health.  Studies from outside of California indicate that community public health risks of exposures to toxic air contaminants (such as benzene and aliphatic hydrocarbons) are most significant within 1⁄2 mile (800 meters or 2,625 feet) from active oil and gas development.  These risks will depend on local conditions and the types of gas and petroleum being produced.  Actual exposures and subsequent health impacts in the Los Angeles Basin may be similar or different, but they have not been measured.

The results of our groundwater risk investigation, based upon available data, indicate
that a small amount of hydraulic fracturing in the Los Angeles Basin has occurred within groundwater with <10,000 mg/L total dissolved solids (TDS) and in close proximity to groundwater with <3,000 mg/L TDS.  This creates a risk of hydraulic fractures extending into or connecting with protected groundwater and creating a possible pathway for human exposures to chemicals in fracturing fluids for those that rely on these water resources. To be sure, there can be localized problems with oil or gas emissions, but I think it is important to note that we are talking about one of the poorest air quality regions of our country.   The greater LA Basin has traditionally had areas of significant non-attainment for national and state air quality standards.  For example, Los Angeles-Long Beach was #1 in ozone pollution, #3 in year-round particulate matter pollution, and #4 in short-term particle pollution as measured by the American Lung Association (2015).  Even areas such as our home County of Ventura have serious problems with ozone (see the figure below). Ozone attainment by county in California in 2008.  Most of these counties were obviously far from achieving established air quality standards.  Map source in legend.

Ultimately we have crappy air pollution because we are burning a massive amount of oil and gas.  The big issue here, the major source of toxins in our air, and the 400 pound gorilla in the room is the burning of that oil.  Local oil and gas drilling and the subsequent movement of that extracted product is clearly potentially problematic at the local level (especially if you are one of the 32,000 folks living within 100 m of one of these facilities), but the millions of cars and the hundreds of power plants combusting those materials are the true issue.

Those cars and smokestacks, along with the unintended and by-design systems that encourage them, are the issue.  Lets focus on that.