Wow!  Our venerable, longtime offshore and coastal oil and gas producer here in Ventura and Santa Barbara–Venoco–has shuttered operations and is entering bankruptcy.  On Monday (April 17, 2017), Venoco filed for Chapter 11 bankruptcy with the U.S. Bankruptcy Court for the District of Delaware. This was their second filing within the past year for Bankruptcy protection, but all indications are this is not some type of additional restructuring, but rather the end of the company.

While Venoco has long been struggling under the regulatory constraints of oil production here in coastal California, the final straw was the implosion of their ability to get crude oil to refineries in Kern County in the wake of the 2015 Refugio Oil Spill and associated shuttering of Plains All American’s Line 901. Line 901’s closure triggered Venoco’s initial bankruptcy filing on July 14, 2016 which birthed their ccourt-approved restructuring plan that got them out of an estimated $1 billion in debt. But it clearly wasn’t enough. The economic hammer was a greater factor than the anti-oil drilling contingent (something we have seen across numerous extractive industries in recent decades).


Right now some of the greatest attention is being paid to their offshore oil platform holdings. Venoco said on their website that, Platform Holly and their South Ellwood Oilfield are being formally transferred to the state of California. California will then presumably (via the State Lands Commission and Department of Natural Resources) wind down operations of these facilities.  Holly has been completely shut in (producing no hydrocarbons) since the May 2015 and much of their other production across their portfolio reduced.  Venoco’s major production holdings include the following (with the primary source for this my own recollections and Venoco themselves):

The South Ellwood field is located in state waters approximately two miles offshore California in the Santa Barbara Channel. Venoco produced oil and natural gas from Platform Holly and processed the resources at an onshore facility. They acquired interest in the field from Mobil Oil Corporation in 1997. Since

that time, they made numerous operational enhancements to the field, including redrills, sidetracks and reworks of existing wells and upgrades at the platform and the onshore processing facility. Additionally, in 2012 Venoco initiated a drilling program that resulted in a significant increase in production from the field. They operate the South Ellwood Field and have 100% working interest.

The South Ellwood field is approximately seven miles long and is part of a regional east-west trend of similar geologic structures running along the northern flank of the Santa Barbara channel and extending to the Ventura basin. This trend encompasses several fields that, over their respective lifetimes, were each expected to produce over 100 million barrels of oil, according to the California Division of Oil, Gas, and Geothermal Resources. The Monterey shale formation is the primary oil reservoir in the field.

Venoco was having problems with Holly prior to the Refugio Spill, as one would expect from a aging facility.

The Santa Clara Federal Unit is located approximately 10 miles offshore in the Santa Barbara channel near Oxnard, California. Their operations in the unit are conducted from two platforms: Platform Gail in the Sockeye field and Platform Grace in the Santa Clara field. Venoco acquired interest in the unit and the associated facilities from Chevron in February 1999 and now operate the unit and have a 100% working interest.

The Sockeye field structure is a northwest/southeast trending anticline bounded to the north and south by fault systems. The field produces from multiple stacked reservoirs ranging from the Monterey to the Middle Sespe formations.

Chevron shut-in production at Platform Grace in the Santa Clara field in 1997. From that time until 2011, Venoco primarily used Grace as a launching and receiving facility for pipeline cleaning devices and as an interconnecting pipeline to transport oil and natural gas produced from platform Gail to their onshore plant. In 2011, Venoco returned one well to production at platform Grace and it is again an active producing offshore platform.

Venoco acquired the West Montalvo field in Ventura County, California in May 2007 and operated the field with a 100% working interest. The field lies within an eastward plunging anticline and produces from the Sespe formation. The field, which includes an offshore portion that is developed from onshore locations, produces sweet oil with a gravity of approximately 16 degrees. After acquiring the field, their primary activities consisted of returning idle wells to production, re-drilling from existing wells to new proved undeveloped locations, working over and recompleting existing wells, and upgrading well lift systems and processing facilities. In the last few years their focus has been on drilling new wells and increasing production of oil from that area.

The Beverly Hills West field is located in Beverly Hills, California. All production operations at the field are conducted from a 0.5 ac parcel of land slightly on the border of the cities of Beverly Hills and Century City (“Beverly Hills adjacent” as we might say). Venoco acquired their interest in the field in 1995 and operated the field and have a 100% working interest. Their lease under which we operate the field expired in 2016 and it is unclear to me if the terms of the lease were extended at the end of 2016.

The Dos Cuadras field is located in federal waters approximately five miles offshore California in the Santa Barbara channel. Venoco acquired their 25% non-operated working interest in the western two-thirds of the field from Chevron in February 1999, which includes three offshore platforms. They have working interests ranging from approximately 17.5% to 25% in the associated onshore facility and pipelines. The field is operated by DCOR, an unaffiliated third party California operator.

As of Monday evening, visitors to Venoco’s website are greeted by this: 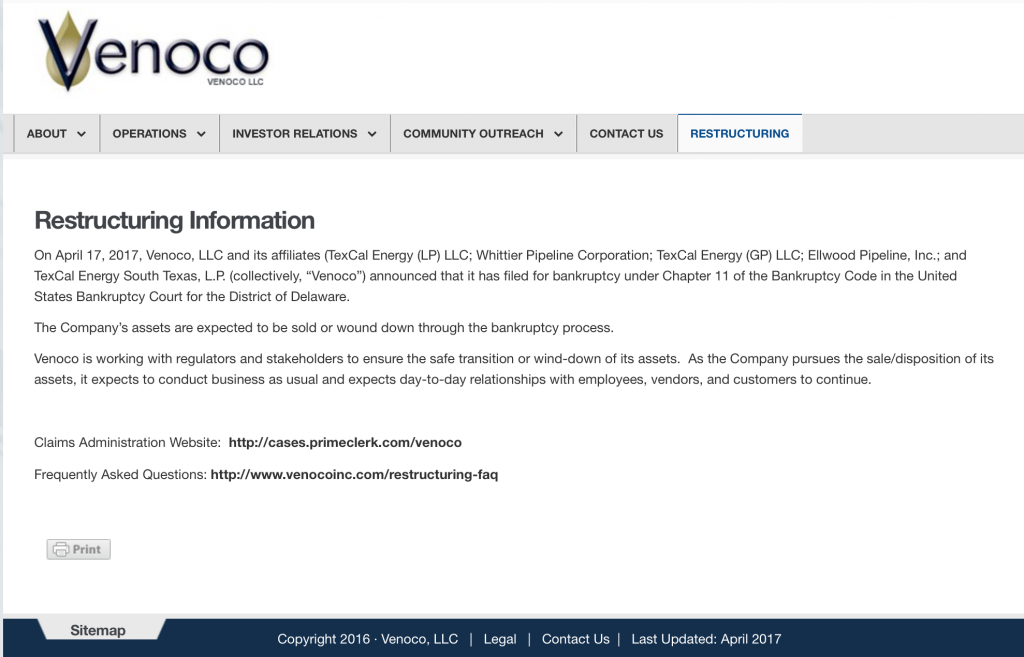 I am off to some meetings this morning and don’t have time for anything more detailed that this short posting right now.  But for a bit more detail than I can get into, check out this brief round-up of local media:

Here is the subset of the text from KEYT:

Venoco, LLC announced Monday that it has filed for bankruptcy and its assets are to be sold or wound down through the bankruptcy process.

“Today’s filing is the result of unfortunate circumstances impacting the company’s financial strength, including the ongoing closure of Plains All American Pipeline’s Line 901,” said Mike Wracher, Venoco’s COO. “We have pursued a number of market-based and regulatory solutions to address these challenges during the last year. Despite these considerable efforts, our financial position now compels us to take this action.”

Venoco filed the bankruptcy petition in 2016. It notified the California State Lands Commission last week regarding its incapability of meeting the terms and obligations for the South Ellwood Field leases, including Platform Holly and the Goleta Beach Pier leases.

On Monday, Venoco quitclaimed its interests in Platform Holly and the Goleta Beach Pier leases which would end commercial oil and gas production within state waters. This leaves 85.1 million barrels of recoverable oil in the ground.

“The quitclaim is a positive development for the Goleta community and all of us who look forward to the restoration of our coastline. The City’s paramount concern has been and will continue to be the public health and safety of our community and our residents. Our city council and staff look forward to working with California’s State Lands Commission and other agencies on the decommissioning of these facilities. We will keep the public fully informed as more details become available.”

On May 19, 2015, the underground pipeline that transports oil produced from Platform Holly ruptured causing the Refugio Oil Spill. The pipeline remained closed which created a loss for Venoco.

And this from Noozhawk:

The company said that as it pursues the disposition of its assets, it expects to conduct business as usual, and day-to-day relationships with employees, vendors and customers will continue.

That legal action came shortly after Venoco filed for bankruptcy with a plan to shed more than $1 billion in debt under an agreement with senior lenders, including Apollo Investment Corp., to exchange debt for ownership shares.

At the time, the company cited low oil and gas prices, in addition to the pipeline shutdown, as reasons for the restructuring.

And KCBX had a nice, short radio blurb (play it here), excerpts from their piece:

The energy company Venoco announced it has filed for Chapter 11 bankruptcy. The company told the California State Lands Commission it no longer has the financial means to continue operating its oil platform in the Santa Barbara Channel.

Two months ago, a Venoco spokesperson said the company proposed to drill for oil off the Santa Barbara coast for another 25 years. Until last week, the company had an active application before the California State Lands Commission to expand a portion of its oil production in state waters…

The company’s offshore leases – known as the South Ellwood Fields – and an onshore processing facility at the Goleta Beach Pier revert back to the state after Venoco quitclaimed them.

“Under California law, the California Coastal Sanctuary Act, no new leases for offshore oil and gas production can be issued at this location. So these offshore lands go into the coastal sanctuary,” Lucchesi said.

Some of Venoco’s platforms are in state waters, strictly governed by California state laws. The company says it plans to continue production at its platforms in federal waters until it sells its assets under the court-supervised bankruptcy process.

…Linda Krop is chief counsel for the Environmental Defense Center. She says until recently, the center and local activists were working to stop an increase in oil production in the Santa Barbara Channel.

“[Venoco was] trying to expand their operations from Platform Holly and extend the life of the platform, plus the onshore processing plant, and that generated a lot of opposition,” Krop said. “We’ve been fighting that proposal for close to 20 years, both by Venoco and its predecessors.”

Those opposed to oil and gas drilling off the California coast are celebrating news of Venoco’s quitclaim.

“It’s fantastic news because these facilities were very old. Some were built in the 40s, some in the 60s, so there were a lot of concerns here about oil spills and gas leaks, and we have experienced both,” Krop said. “So this is really good news for the community that these facilities won’t be operating any more and that our coastline can be restored.”

The state says since taking over the South Ellwood Field leases from Exxon in 1997, Venoco has paid about $160,000,000 in royalties and rent, and hasn’t had “any significant spills on state property,’ according to a State Lands Commission statement issued April 17.  The city of Goleta and Santa Barbara County coffers will be negatively impacted by Venoco’s bankruptcy.

“We have a long, complex and expensive process ahead of us in plugging and abandoning the 32 wells and pursuing decommissioning and ultimate removal of the facilities,” Lucchesi said. “And the commission is committed to working with all the local communities and stakeholders and regulatory agencies with jurisdiction to ensure a collaborative and efficient process.”

Venoco said eventually all its employees will lose their jobs once the company sells all its assets. In the meantime, Venoco said it expects to conduct business as usual and will maintain “day-to-day relationships with employees, vendors and customers.”