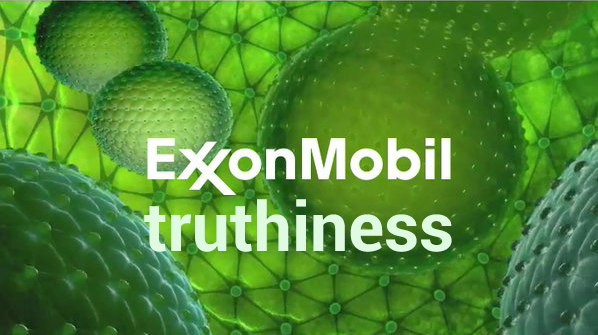 Lipstick on a Pig?

It appears to be no coincidence that ExxonMobil has recently released a new series of beautiful and very slick TV and online ads implying that they are all about innovation and very interested in alternative energies.  (Their most recent releases are below:)

Reality is far from the images portrayed in this campaign where internal combustion engines emit rainbows and industry scientists spend time researching algal-based biofuels.  Indeed, this current lobbying effort seem to be mostly about serving as something of a counter point to two major media stories capturing wider media attention here in December of 2015: the Paris Climate Change Summit and the unfolding investigation into alleged illegal statements and deception from Exxon leadership.  While the role of ExxonMobil in funding anti-science campaigns and backing political candidates who loathe facts or reasoned discussion on energy policy and the most detrimental aspects of our oil-based economy is well known.

What we say to our family vs. what we tell the neighbors

Recent investigations into Exxon’s internal documents show they were indeed at the cutting of climate change research back in the day and knew of the potential threats of fossil fuel-related emissions since I was a little kid in the 1970’s. As Harvard climate historian Naomi Orestes noted in the New York Times in October:

But Exxon was sending a different message, even though its own evidence contradicted its public claim that the science was highly uncertain and no one really knew whether the climate was changing or, if it was changing, what was causing it … Journalists and scientists have identified more than 30 different organizations funded by the company that have worked to undermine the scientific message and prevent policy action to control greenhouse gas emissions.

Exxon responded to these revelations by pointing out that over the last 4o years their scientists (apparently the lady in the above TV spot???) have continued to publish peer-reviewed climate research:

Our scientists have contributed climate research and related policy analysis to more than 50 papers in peer-reviewed publications – all out in the open. They’ve participated in the United Nations Intergovernmental Panel on Climate Change since its inception – in 1988 – and were involved in the National Academy of Sciences review of the third U.S. National Climate Assessment Report.

Finally, I’ll note that we have long – and publicly – supported a revenue-neutral carbon tax as the most effective, transparent, and efficient way for governments to send a signal to consumers and the economy to reduce the use of carbon-based fuels. 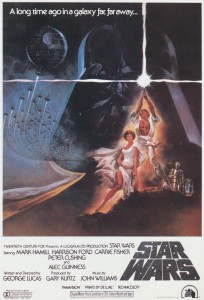 Exxon has know the reality about climate change as long as there has been a galaxy far, far away.

The interesting issue here is the apparently marked divergence between the now-released revelations from these previously hidden internal reports and Exxon’s public face (their spokesman pointed to Exxon’s peer-reviewed publications from their scientists between 1983 and 2014 – 53 papers in all), including their comments to shareholders.

While the then-Exxon (now ExxonMobil) was understanding and apparently attempting to deal with climate change as early as 1977 (note to my younger students: this was when the first Star Wars was released and 11 years before the launch of the IPCC), their outward arguments have been something different. Distinct from this internal behavior/reality, Exxon has had a different public persona since at least the mid 1980’s.  To the wider world, Exxon has spent the past 40 years wholeheartedly refusing to publicly acknowledge climate change and gone so far as to promote misinformation (a more cynical person might even use the term “propaganda”) ala the tobacco industry regarding the health risks of smoking.  Both were industries producing products and byproducts with significant and increasingly well understood toxicity who were concerned that acknowledging this toxicity could subsequently drive away consumers and ultimately harm their profitability.

The recent revelations of internal documents apparently show that ExxonMobil recognized the potential dangers of climate change and began factoring likely predictions from rising seas, more intense hurricanes, etc. into their own internal business planning and decisions as early as 1981.  The ensuing raft of news coverage drove the New York State Attorney General to launch an investigation last month to determine whether ExxonMobil indeed broke the law by misleading investors and the public about the risks posed by climate change.

According to people with knowledge of the investigation, Attorney General Eric T. Schneiderman issued a subpoena Wednesday evening to ExxonMobil, demanding extensive financial records, emails and other documents.

The investigation focuses on whether statements the company made to investors about climate risks as recently as this year were consistent with the company’s own long-running scientific research.

The people said the inquiry would include a period of at least a decade during which Exxon Mobil funded outside groups that sought to undermine climate science, even as its in-house scientists were outlining the potential consequences — and uncertainties — to company executives.

Kenneth P. Cohen, vice president for public affairs at ExxonMobil, said on Thursday that the company had received the subpoena and was still deciding how to respond.

A detailed July 2015 press release from the Union of Concerned Scientists links to various original documents that sparked the recent concern and investigations.  Anyone wishing to see the original documents should check that out.

It is perhaps not surprising that a company that exists to make money might set a course that is designed to maximize their revenues, ecotoxicological facts and planet be damned.  Leaving those issues aside, I think it is perhaps most illuminating to see what was actually said over the years.  Forget all the rhetoric on both sides of the issue for a moment and focus on what was actually said.  The New York Times did a great job in excerpting relevant passages from these internal documents (see the publicly available ones here) in a story last month.  I have excerpted and formatted the following statements after that piece.  I have added in my own commentary by denoting statements which I believe to be accurate (in green) and statements which are perhaps disingenuous (in red).  You can be the judge as to whether these red statements cross the line…or just wait for the New York Attorney General’s formal findings to be released in the coming months.

An X Prize for Going Deep