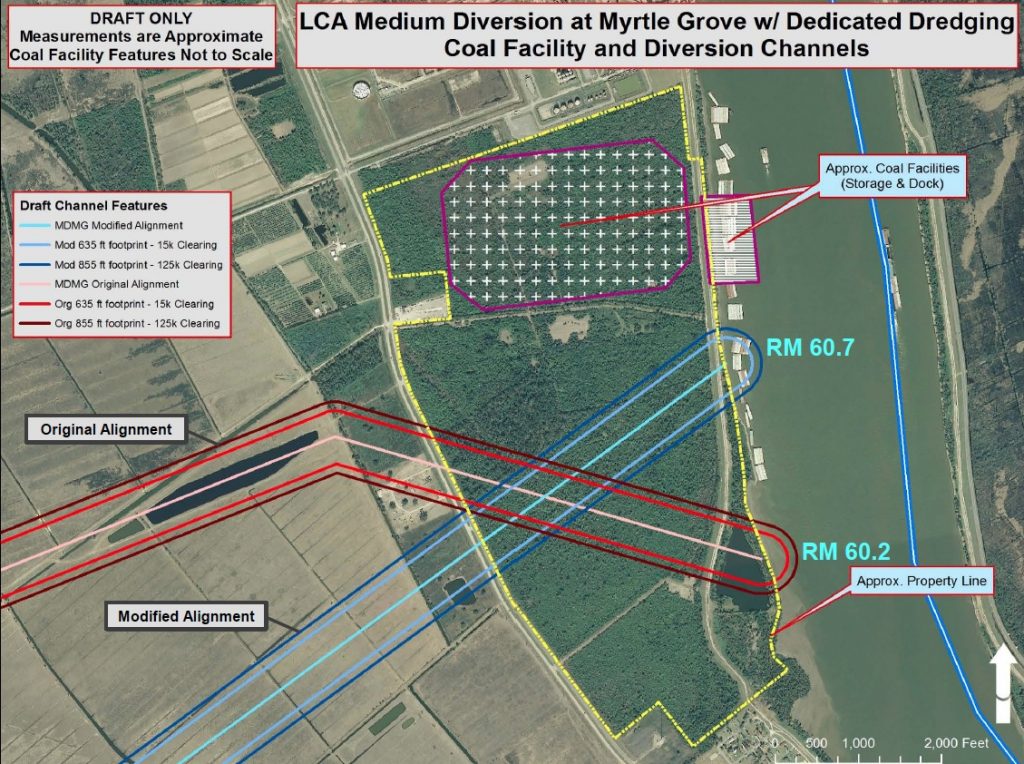 This via our friends at Tulane’s TUWaterWays:

A proposed coal terminal in Plaquemines Parish is coming into conflict with the Coastal Master Plan, leading to questions about the future of a major restoration project in the Plan. In addition to the proposed terminal, the new facility, owned by Ram Terminals, would include a railroad line, multistory office building, and a large maintenance shop. The project has been permitted by the Army Corps of Engineers since 2014, but Louisiana’s Department of Natural Resources is having a much harder time pushing it through, mostly because the proposal would intersect with one of the largest projects proposed in the Coastal Master Plan, the Mid-Barataria sediment diversion, which aims to move water and sediment into Barataria Bay and rebuild marshland.    RAM Terminals first applied to the Louisiana Department of Natural Resources for a coastal-use permit in 2012, but the decision to grant the permit was overruled by a judge who felt that the DNR should take a second look at alternative sites, in light of complaints from indigenous groups, local residents, and environmental groups. In April of last year, the permit was revived and then reconsidered, amid controversy over whether the terminal should be able to be built at all.
The state currently has a memorandum of understanding with Ram where the state would allow the company to continue its preparations until Louisiana lets them know they are ready to open the Mid-Barataria, so long as Ram agrees to pay a daily fine, capped at $1.9 million a year, for holding them up once they want them to get their ugly, yella, no-good keisters off (technically, not) their property. Some think that compromising a little effectiveness might be OK, if we can keep the economy rolling by inviting industry. Others think it is a sign of troubling conflicts to come between coastal restoration priorities and industry growth. That time may be coming sooner than expected, as the Mid-Barataria has been approved by the Feds for a quicker permitting process.