A few distinct, but unrelated experiences have brought the issue of plastic balloons in the ocean into frequent conversation this week. 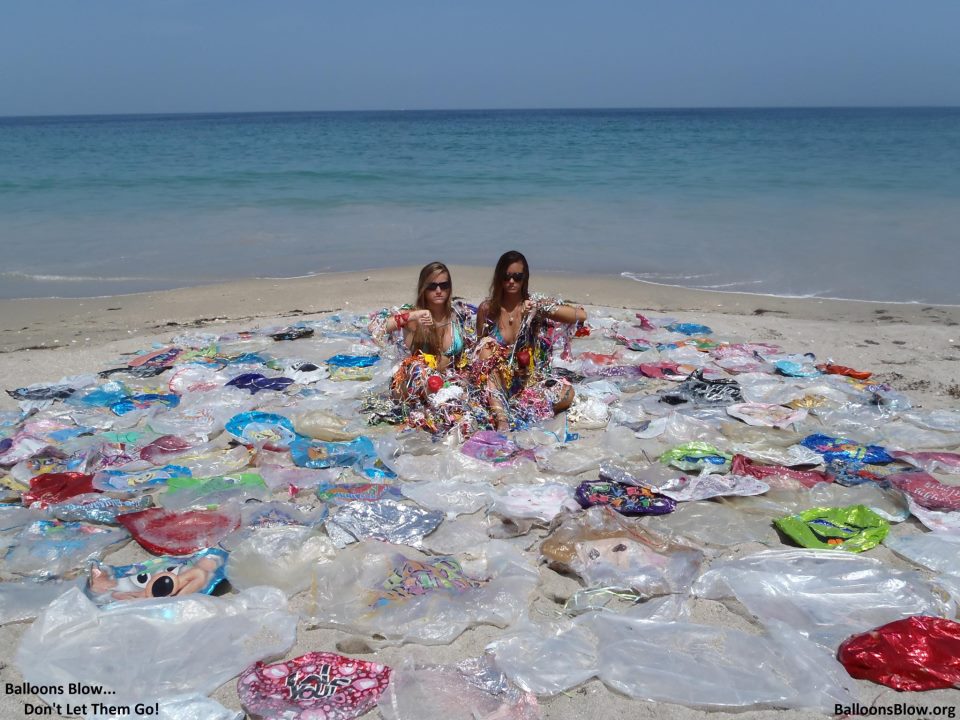 Scorpion Cove Beach on the foggy early morning of September 18, 2016.  This section of Santa Cruz Island is owned by Channel Islands National Park.

It began with last Saturday’s annual California Coastal Cleanup Day.  I happened to be out on Santa Cruz Island with my son’s Boy Scout Troop.  Our 30 scouts made quick work of the debris on this cobble beach, ultimately cleaning up just over 2.6 kg (5.6 lbs.) of garbage off the comparatively clean beach that afternoon.  Our cleanup was one of nearly 1,000 such beaches targeted for cleanup by anti-trash volunteers across the Golden State.  While we had a grand total of zero balloons recovered on that Santa Cruz Island survey, our Island Packers boat twice paused on our way out to the island earlier that morning to recover two separate balloons floating in the Santa Barbara Channel.  Our cleanup, the boat recovery, and a microplastics beach demonstration I ran for our scouts later that weekend all drove a series of discussions of both plastics generally and balloons in particular. 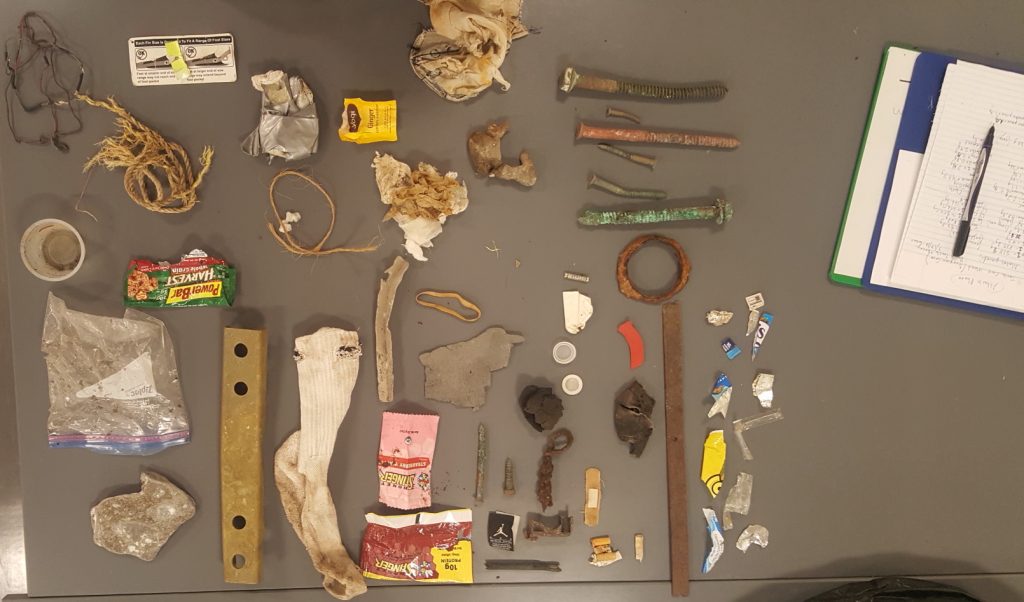 The pervious week saw my wife order me into the waters off of Balboa Island to get a floating balloon because “that’s what you do.”  And then two days ago came a call from the Ventura County Star’s Colleen Cason asking about balloons (who had been similarly motivated to think about balloons by a brief balloon-motivated detour on a trip out to the Channel Islands last weekend).  Check out Colleen’s piece here.

As almost all of these recent balloon-in-the-sea conversations have me repeating the same things over and over, I suddenly realized a little summary for anyone interested in such party pollution might be in order. 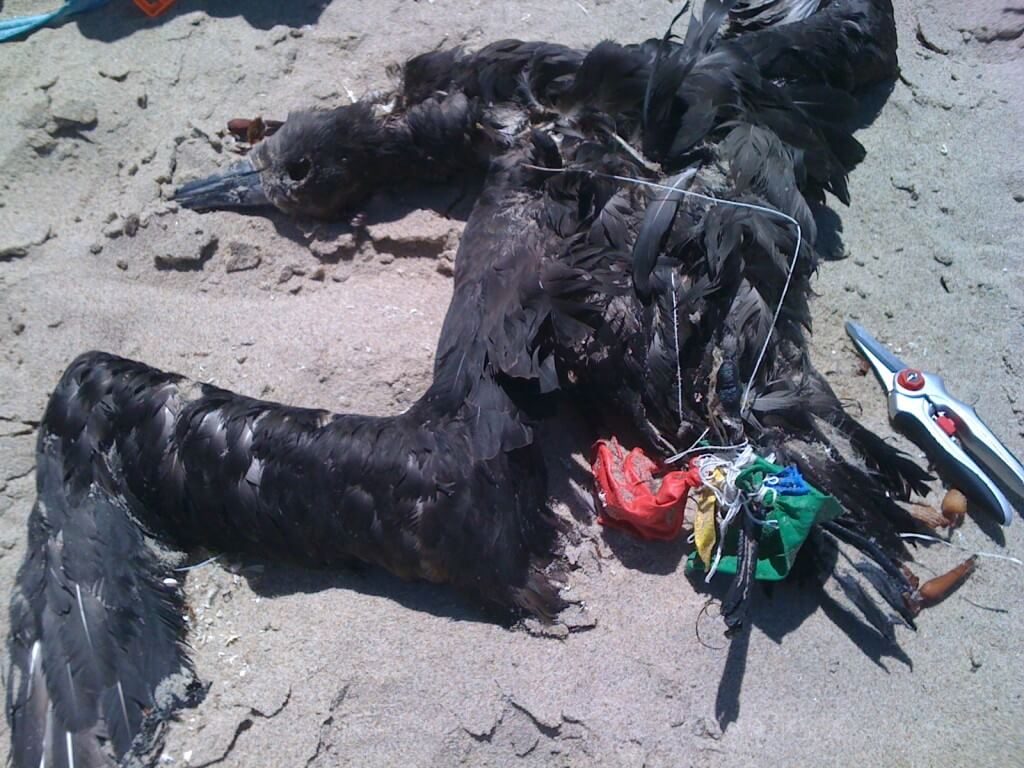 Most of the balloons we encounter in our daily lives fall into one of two categories: 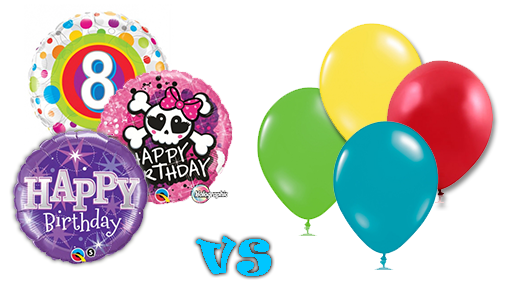 Latex balloons are created from rubber.  That rubber can be either synthetic (created from polymerizing a monomer such as isoprene, generally deprived from natural gas or crude oil) or natural (milked from trees of the genus Hevea, a Euphorb).  The traditional term “India rubber” refers to natural latex harvested from Hevea trees, especially the Pará rubber tree (Hevea brasiliensis).  Even “natural” latex is usually altered chemically before being turned into commercial rubber balloon fodder.  Most often this treatment is via a vulcanization process (i.e. curing) wherein that natural latex is baked to crosslink the existing polymer with additional compounds (most typically sulphur) and in so doing alter some of the compound’s chemical properties.  In the case of balloons, this vulcanization serves to make the rubber smoother, more pliable, and less sticky.  Latex rubber balloons break down comparatively quickly in the environment, especially when that rubber is thin-walled and exposed to prolonged, strong sunlight/UV and high heat such as under a midday summer sun.

“Mylar” is a trade name for metal-coated poly(ethylene terephthalate) or PET, created for NASA’s space program.  Metalized PET was first used by NASA in their 1964 Echo II balloon satellite project.  Most of our current commercial balloons are actually made of Biaxially-oriented polyethylene terephthalate (BoPET), a polyester film made from stretching PET.  The BoPET is covered on one site with polyethylene for improve puncture resistance and on the other by aluminum (or another metal) for a maximally reflective surface.  These coverings also allow the balloons to be heat sealed (something not possible with “pure” PET itself).  These coatings act to make the material stronger and more durable, but consequently harder to break down once their short product lifespan is over.  In such discussions of balloons by the less chemically or industry savvy, you will find “Mylar,” “polyethylene,” “PET,” and “foil balloon” used more or less interchangeably.  In addition to Mylar, Melinex and Hostaphan are other common trade names you might see for equivalent materials.

How does this Mylar Stuff go away?

“Away” is always a relative term.  Philosophical musings aside, a better question might be “How do plastic balloons decompose?”

Mylar is one type of plastic.  And most of our modern plastics are essentially long chains of repeating carbon (what chemists call “organic”) molecules. We “decompose” plastic by both breaking up those long, repeating chemical chains and by chemically turning those building blocks into some other compound.  We have essentially four options to do that:

Degradation in the ocean

Consistently, the next question I’ll get asked is “how long does it take to break down Mylar.”  And I always disappoint with the classically annoying professorial retort “it depends.”  In reality some in the plastics industry would have you believe that Mylar simply “breaks down” quickly.  Unfortunately, this is a very slow process in practice.  Much slower than the break down of latex, for example.  In practice pure PET will probably take at least many months to a year or more to start significantly falling apart, albeit yellowing and an increase in brittleness can being within minutes of exposure to strong sunlight.  In practice the coatings, especially the metalized outer surface, act to shield the inner core plastic.  Add to that these balloons are in the ocean where water temperature acts as a thermal insulator keeping the plastic from ever getting as hot as it otherwise would.  Again that metal foils (sorry, too good an opportunity for a pun) microbial activity as well by shielding the internal “tasty” plastic from the microbes most able to eat and subsequently degrade it.

On the positive side, the balloon material will be exposed to potentially elevated physical trauma if the ocean is choppy or the balloon is being bashed into the intertidal.  But again, this will act to breakup the aggregate balloon into small pieces, but not chemically transform it per se.

What should we do with our Mylar waste?

Ultimately synthetic plastics such as Mylar have few responsible fates, with the best course to minimize the production/use of the material in the first place.  But as we seem to love our Mylar, I have ranked the possible fates in order from least to most preferable.

Obviously a horrible idea.  The vast majority of released balloons ultimately end up in waterways and the global ocean.  See my section on risks below.

Combusting materials definitely gets rid of the physical mass, but this merely converts a solid waste problem into a gaseous waste problem.  In the process you typically generate things none of us should be breathing.

The most common, “least bad” of the poor alternatives.  This is just what it sounds like.

Properly collected plastics can occasionally be recycled, assuming a local waste collector has the proper fiscal incentives and technology.  Most of the guides out there rapidly default to talking about the PET core of Mylar and note that regular PET is recyclable.  But recall our Mylar is PET plus other stuff (especially that dang metal coating).  When it comes to recycling (and particularly when it comes to recycling of low profit margin items like plastic), contaminants are the key consideration.  When the material supply is homogeneous, recycling proceeds quickly and yields a high quality ending material that can reenter the production cycle for yet another life.  But with each impurity the technical and chemical challenge grows and the meager profits shrink.  In practice most sources seem to quickly segway into discussions of repurposing or down cycling Mylar balloons.  For example, Recycle Scene suggests getting crafty and using old Mylar balloons for bird deterring flash strips.

What risks do floating balloons pose?

Initially we are talking about threats from the physical structure of the ballon (entanglement and ingestion).  We have little direct evidence of acute or chronic toxicity of this plastic to individuals post-ingestion, but the ubiquity of this material and sheer additional volume entering the seas daily make this an increasingly likely potential impact.  My colleagues and I as well as labs across the planet are actively working on this now (California is becoming something of a hotbed for marine debris research).  Stay tuned for more info on that story.

Essentially anything can get potentially get entangled by a flotsam balloon.  Most commonly we hear of larger animals such as seals and sea lions bound with plastic, but this is a risk to any oceanic creature (NOAA documents 200 species).  I have occasionally seen balloons and/or functionally similar plastic bag waste wrapped in kelp canopies, gorgonian fans, and coral heads, showing sessile organisms are impacted by this waste as are the more conspicuous mobile critters. 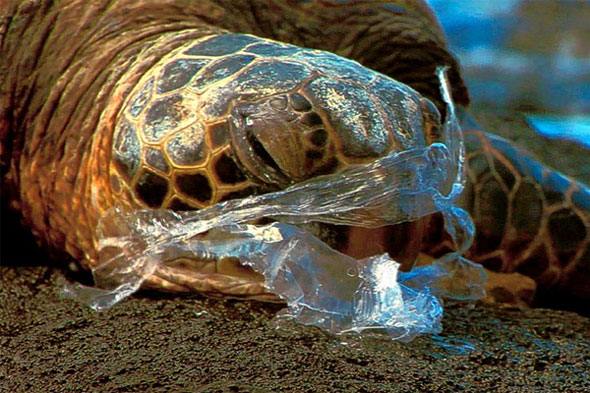 Essentially here we are talking about floating objects that can occasionally resemble jellyfish.  The organisms that ingest jellies are most at risk here; sea turtles, ocean sunfish (Mola mola), and the like.  Other critters will occasionally ingest them (e.g. tuna) or attempt to use them as structural elements (e.g. albatross nests).  When ingested, balloons can obstruct digestive tracts and pose a great risk to the animal in question of a painful, drawn out death via starvation. 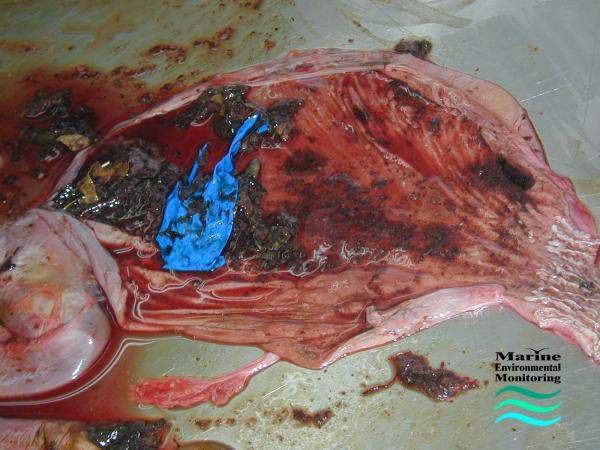 Are oceanic balloons a big problem?

Not exactly.  Our most recent surveys of Channel Island and California mainland beaches (Miller, et al. 2016) run from Fall 2015 through Spring 2016 show latex and mylar balloons combined total a mere 0.01% of the total weight of material washing onto our southern California beaches.  We see the same story if we talk about the number of pieces (see the graph below); around 1% of the total pieces of waste recovered during our annual state-wide Coastal Cleanup Days.  So the problem of balloons in the sea is not that big in relative terms.  Yes there are (literally) tons of balloons washing into or landing upon the surface of our seas daily, but that ultimately pales in significance to the many orders of magnitude greater stream of waste entering our ocean, much of which is plastic. 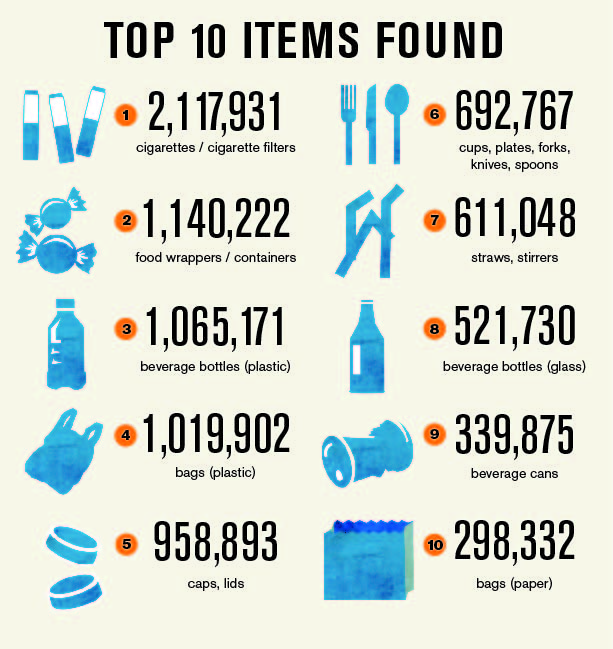 So we shouldn’t care about balloons?

No way!  We should indeed care about these items!

Balloons are fantastic “gateway plastics” that provide a perfect starting point for educating the general public about our plastic-based consumer culture generally and marine debris in particular.  We all know exactly what a ballon is, where it came from and how it was used.  Additionally, the high visibility, shiny metallic surface of a Mylar balloon floating on the surface of the ocean is much more readily detectable than the more numerous, problematic, and ubiquitous microfibers floating through our waters or clear plastic bags floating just subsurface.  Each balloon we pick up is a teaching opportunity.  An example to learn about plastic and a opportunity to educate yourself about non-ballon alternatives (try surfing on over to the BalloonsBlow, for example).

Importantly, balloon waste is also something clearly within our wheelhouse.  It is all too easy to blame some amorphous greedy industry polluter or faceless profiteer for our waste stream.  But who is to blame for the ballon that says “Happy 5th Birthday Sally?”  That would be you and me.  Change always starts in the mirror.  And Mylar balloons are a pretty damn shiny surface.

A few links to some of our ongoing research into plastic pollution: 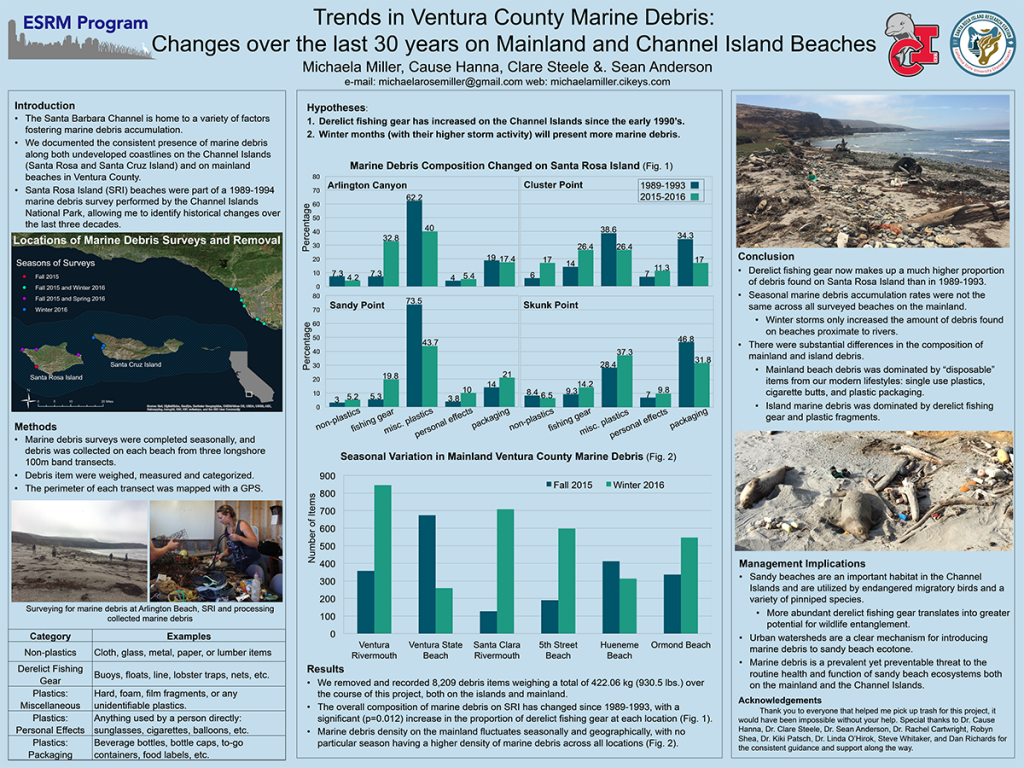 Popular press articles about our collective work on plastics: 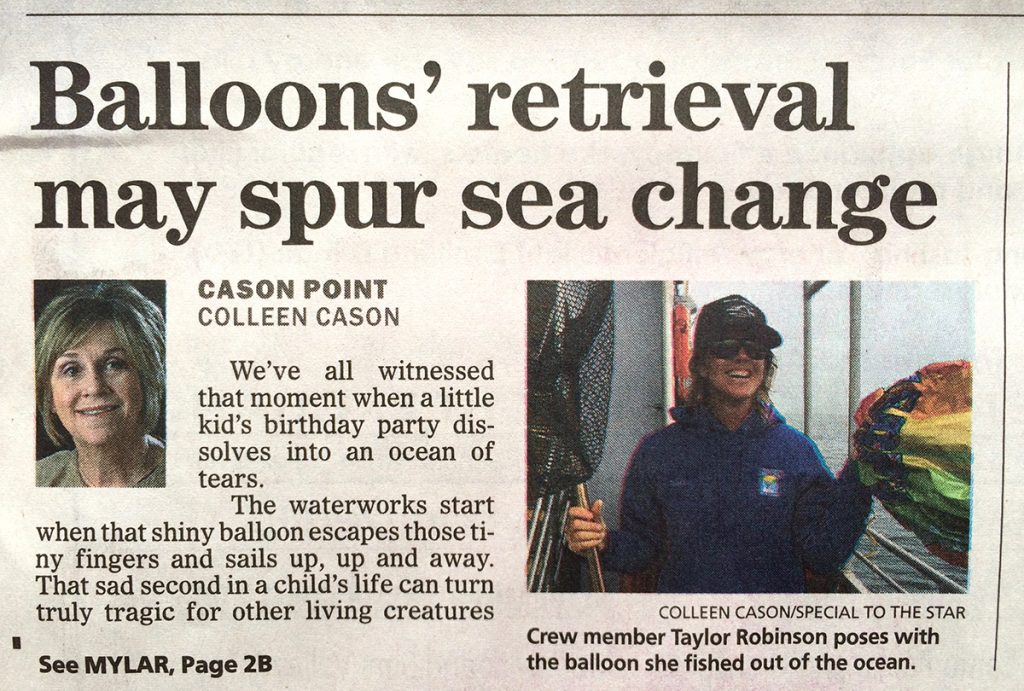