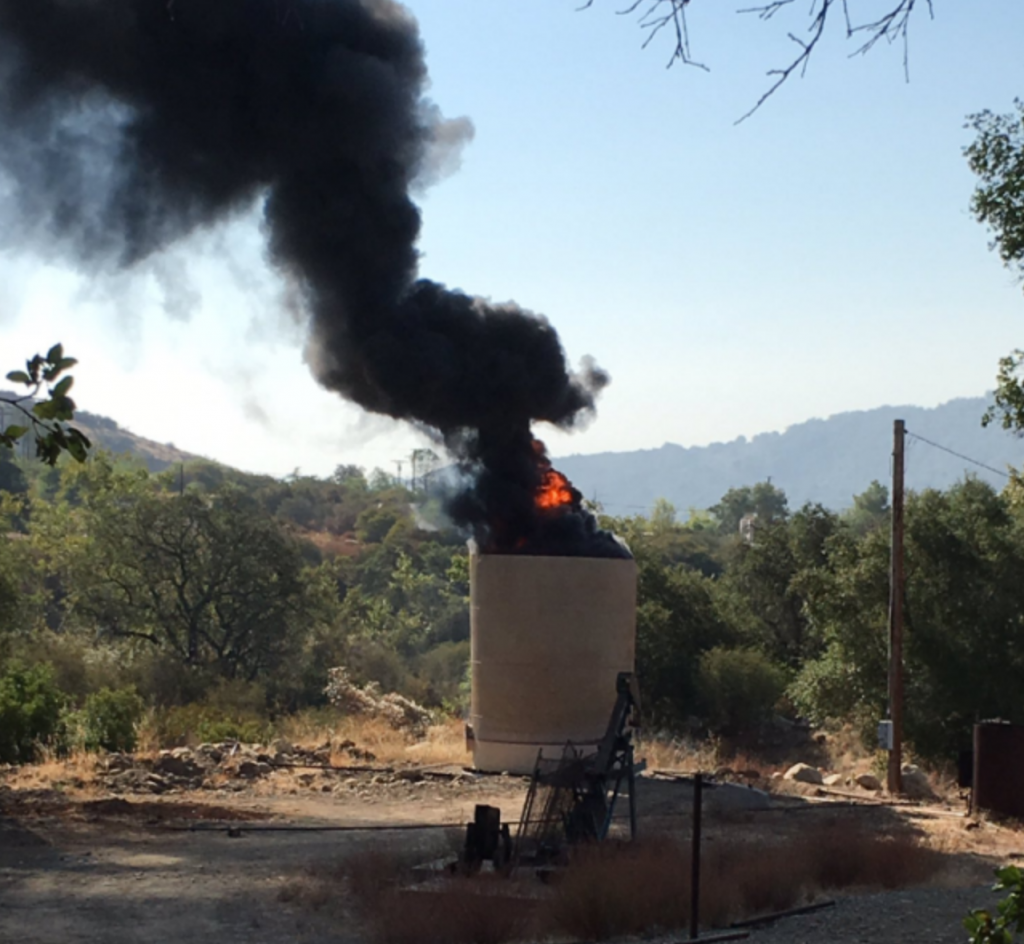 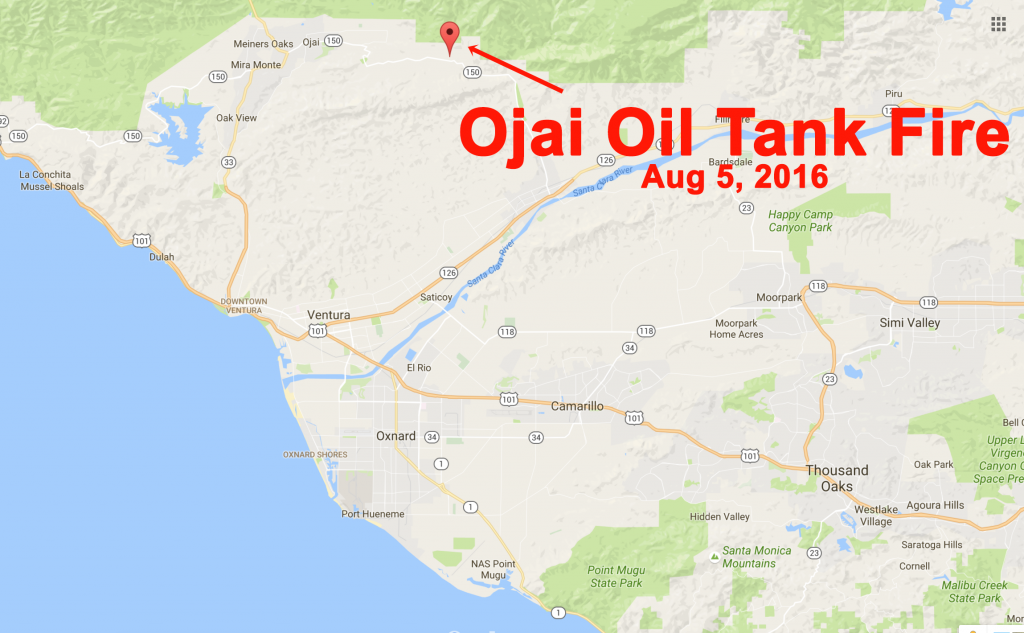 The incident was originally thought to be a burning oil derrick, but subsequent reports have clarified that it is instead a more vertical storage tank that is aflame.  The Ventura County Star is reported it to be a 1,762 gallon holding tank at 9:20:

Fire crews battled a petroleum fire outside Ojai Friday, authorities said. The blaze was reported at 8:35 a.m. near Highway 150 and Topa Lane near Ojai, officials said. Officials reported a tank holding approximately 1,762 gallons of petroleum was on fire. Crews at the scene reported the tank was in danger of collapse. Authorities also reported an explosion had occurred at the scene. Authorities said multiple workers required medical attention due to exposure. The blaze threatened brush in the area, officials said. More than 12 units responded to the incident, according to fire officials.  Luckily this happened very close to Ventura County Fire Department’s Station 20!

Apparently several people are injured and needed medical evacuation.  Concern at the moment is on both containment of the flames, associated air toxicity, and preventing the fire from spreading to the adjacent scrublands already tinder-dry in year four of our state-wide drought (for context see this morning’s LA Times story on the numerous state-wide fires now engulfing California). Of additional concern in the wake of the immediate knocking down of the flames will be mobilization of burned and unburned oil and oil slurry offsite or into the surrounding soil via the hosewater and suppressants.  Our Ventura County Fire Department rocks and they will do everything they can to both stop the flames and minimize impacts from the oil, but there is only so much you can do.  Oil fires can be difficult beasts.   Video via VC Star. I will update this post throughout the day when new developments arise and details are made available. Update August 5, 2016 At 10:13: KEYT’s coverage is here, but no new details. ABC7 has an aerial photo:

THIS JUST IN: Ventura County firefighters working on oil tank fire in Ojai, worried it could spread to nearby brush pic.twitter.com/K25jnVW3OT 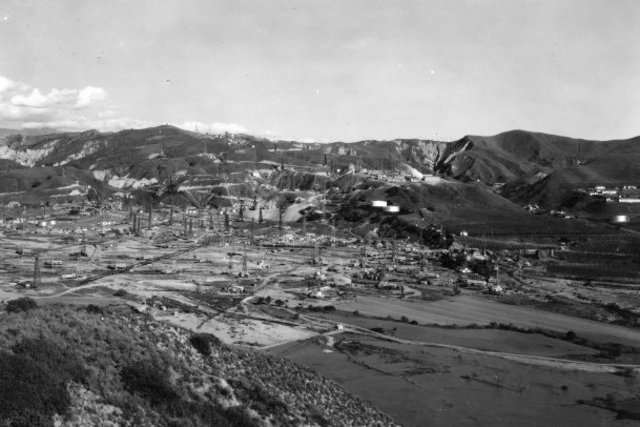 Ventura Avenue Field in 1928, one of America’s greatest petroleum strikes at the time.  Image: Museum of Ventura County.

In reference to some comments I have see: yes, Ventura County’s “back country” has been the epicenter for oil extraction for more than a century.  See for example: Drilling down into Ventura’s history from the VC Star and

Updated injury report shows two workers were injured in the initial blast/ignition.  Fire crews on scene are letting the tank burn down while monitoring the surrounding area to assure the fire will not spread from the immediate tank area itself.  Om addition the incident may now have a formal name: the Topa Fire.

KTLA5 has another raw feed aerial video of the burning tank:

Thankfully in now appears the 5,000 gallon oil storage tank only had an estimated 1,800 gallons of crude in it at the time of the initial explosion.

The roughly 5 m (15 ft.) high and 3 m (10 ft.) diameter vertically-oriented tank is still intact according to the midday news images and video of the site.  This is good news and increases the chance we will get through this with a significant surface spill.

Fire officials are still apparently trying to track down the actual owner of the oil, with some outlets noting that the site has apparently been leased to an as yet undisclosed operator who presumably owns/controls that oil.

VC Star has reported a few more details, including that the operator of the tank is Silver Exploration:

[Ventura County Fire Captain Mike] Lindbery said it was a “vertical explosion” through the top of the 15-foot-tall tank, not an outward one. The 12-foot-wide tank’s walls remained intact, largely containing the flames inside…About two hours after the explosion, as firefighters were moving in to extinguish the fire with the help of a special vehicle, the tank boiled over “and appeared to self-extinguish,” Lindbery said.

The boiling-over was “caused by water at the bottom of the tank boiling and pushing fire and oil out of the top of the tank,” he said.

Some of the flames spilled onto brush, but were extinguished by firefighters before they could significantly spread, Lindbery said. 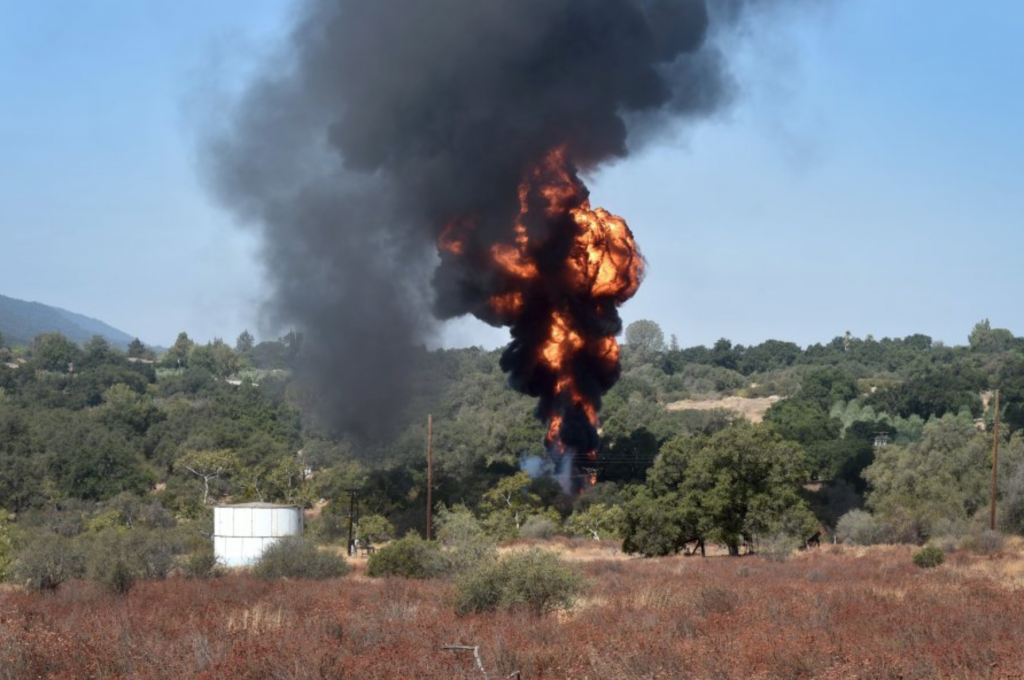 A petroleum fire flares up as firefighters work to extinguish the blaze near Ojai on Friday. Image: Anthony Plascencia/VC Star.