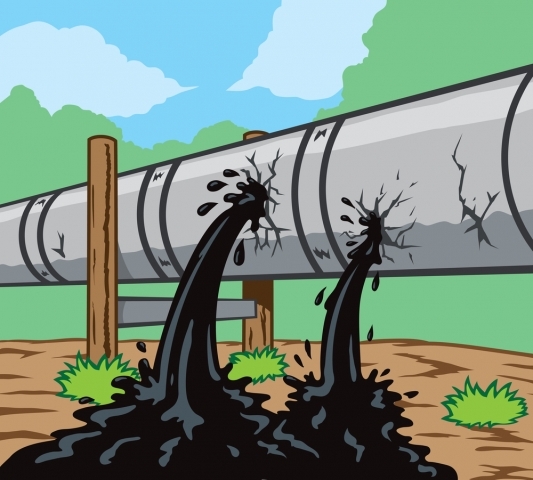 The one year anniversary of the Refugio Oil Spill is fast approaching.  Lots of folks have been asking my colleagues and me about the impacts of this spill now that we have the perspective of a year.  Well, first and foremost, I’m hugely appreciative to the repair man.

The repair guy (I assume it was a dude) with whom I would love to raise a few beers in gratitude is the as yet unidentified pipeline worker who decided to get to his presumably routine maintenance of the Plans All American Pipeline Line 901 just after midday on May 19 of last year.  Before he could do this, he called into the Plain’s pipeline dispatch and asked them to temporarily (or so he thought) shut down flow in this conduit shunting oil from our offshore fields in the Santa Barbara Channel into inland refineries in Kern County.  No sophisticated sensor or switch or command systems stemmed the oil; it was likely a guy in khaki Carhartt’s looking forward to the weekend.  You know: the dude to whom I owe that beer.

That lucky break kept the oil released onto our coastal bluffs and ocean to an estimated 148,000 gallons of crude, a comparatively moderate amount all things considered.  (Note that the actual estimate of release has fluctuated over time, as such numbers are wont to do in these situations.  See the Wikipedia history on the Refugio Spill entry).  Given that this pipeline can transport upwards of 2,000,000 gallons a day, we got off lucky with our taint something less than two hours of pipeline flow.  Considering the slowness of the initial response, the amount of crude spilled could very easily have been at least double or triple that.

An estimated 80,000 gallons of the petroleum released pooled landward of PCH in a swale near the rupture, with at least 60,000 gallons accumulating on Refugio Beach or in adjacent nearshore waters.  We now know that this ocean spill was triple the initial official estimate of 20,000 gallons of oil reaching the sand, an amount my fellow field scientists and I found immediately hard to believe based upon what we were seeing.

While this was a significant spill to be sure, it was still small in the grand scheme to things (about 15 semi-tankers worth of goo or less than 0.01% of the 1969 Santa Barbara spill).  That plus the fact our local ocean has just entered some new era of transition (with emaciated pinnipeds lolling up onto our beaches, depauperate invertebrate communities along our shores, etc.) has made detecting a clear ecological signal of this spill hard to suss out from the noise of this era of increasing coastal degradation. Nevertheless, we have documented clear harm from this oil upon the sand-swelling critters of the south coast.

We’ve seen the clearest impacts of this spill in our human systems.  My colleagues and I have documented clear, acute economic harm from this spill across Santa Barbara, Ventura, and Los Angeles Counties with beach goers spending less money at beaches more heavily hit by tar balls than at beaches untarred or only lightly tarred.  We’ve also seen longer term economic ripples as drillers like Venoco declare bankruptcy due to the indefinitely shuttered pipeline.  Some estimates place the ultimate liability to Plains All American upwards to a quarter of a billion dollars. 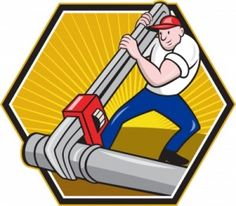 Through this whole mess the spill’s Joint Incident Command (while ultimately capable on the actual cleanup side of things) left much to be desired.  It proved a dismal communicator of information to the public, a bureaucratic morass often deaf to the concerns of sister agencies and the public alike, and not nimble enough to take advantage of the most sophisticated tools we had at our disposal for monitoring and characterizing the rapidly-unfolding spill.  Our opinion polling shows this acted to further eroded public confidence in our government’s ability to respond to such disasters in a timely and open manner. Deepwater Horizon anyone?

But through it all, I’m still thankful to our unsuspecting repair man for making that call to turn the pipe to “off.”  Now if I can just get his phone number, I have a few beers here…

Update: And here comes the big one

Two days shy of the first year anniversary of the spill, a Grand Jury has indicted Plains All American.   The details are still coming out, but the LA Times noted just after 9am (and ultimately in an improved, revised version here):

A pipeline company said Tuesday it has been indicted in connection with a massive oil spill last year in Santa Barbara County.

Plains All American Pipeline said the company and one of its employees was indicted by a state grand jury on 46 counts related to the May 2015 spill.  Both state and local prosecutors had been investigating possible wrongdoing related to the pipe rupture, which sent oil onto beaches and into the ocean.

The corroded pipeline owned by Plains All American Pipeline ruptured May 19, 2015, and spilled roughly 101,000 gallons of crude along the coast near picturesque Refugio State Beach west of Santa Barbara.  About 21,000 gallons made its way from where the underground pipe is buried above U.S. 101 into a storm culvert and flowed into the Pacific Ocean.

Some tar balls from the spill were found as far away as Manhattan Beach in Los Angeles County, state officials said this week.

The section of pipe that broke had worn down to 1/16 of an inch, and investigators found a six-inch crack along the bottom of the pipe, according to preliminary findings from the federal Pipeline and Hazardous Materials Safety Administration.

In a statement, the company said: “Plains believes that neither the company nor any of its employees engaged in any criminal behavior at any time in connection with this accident, and that criminal charges are unwarranted.  We will vigorously defend ourselves against these charges and are confident we will demonstrate that the charges have no merit and represent an inappropriate attempt to criminalize an unfortunate accident.” 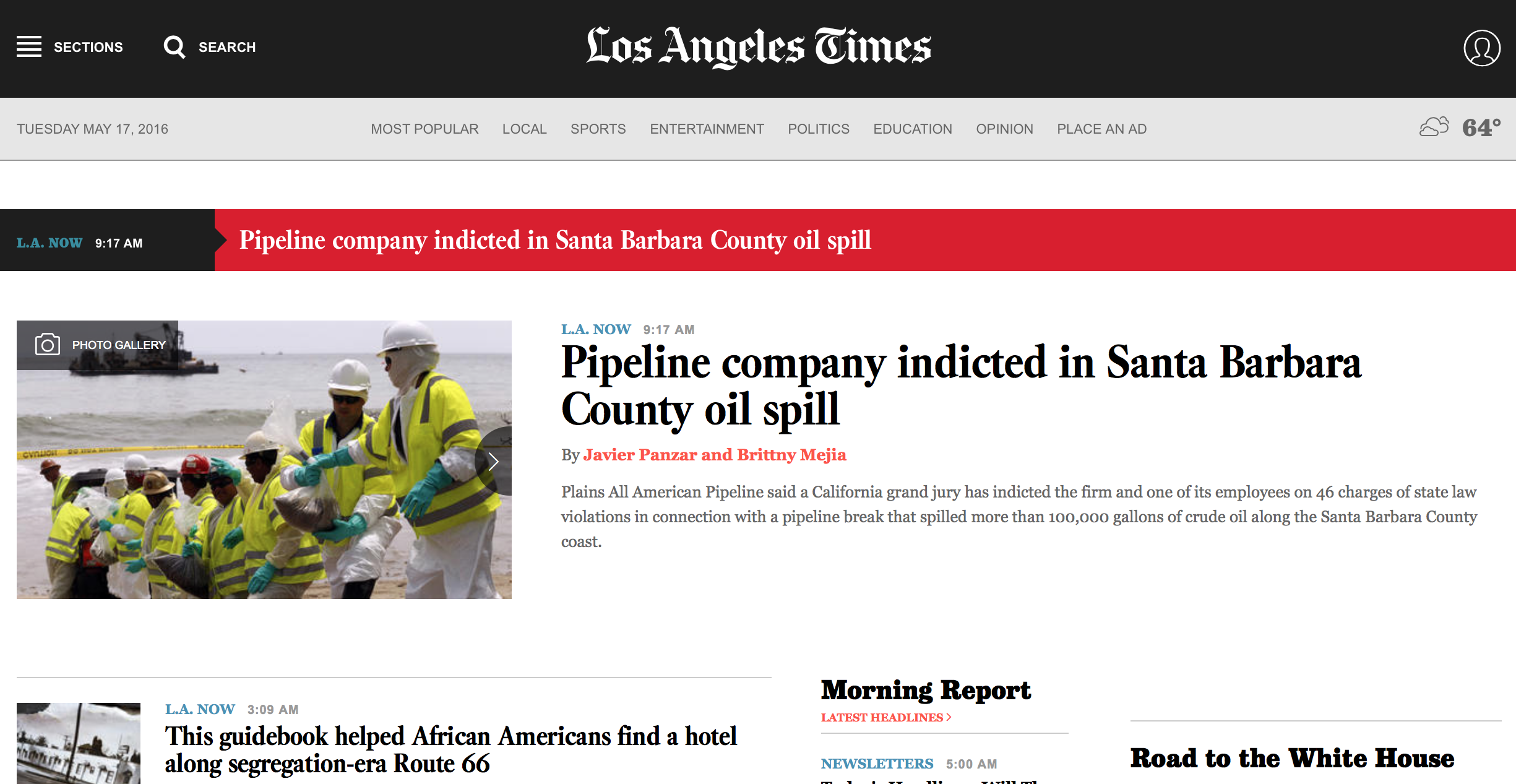 The Ventura County Star ran a truncated and updated version of this blog post as their Sunday, May 22, 2016 newspaper’s Op-Ed.  If you are a subscriber, you can read it on their website, but I’ve also posted it below as it is behind a paywall:

Sean Anderson: Refugio spill a year later: Thanks to the repair guy

A year ago, a group of faculty and undergraduate students from CSU Channel Islands’ Environmental Science and Resource Management Department were on the scene of the Refugio oil spill, sampling sediment and marine life within hours of the initial leak on May 19, 2015.

On Tuesday, a grand jury issued 46 indictments against Texas-based Plains All American Pipeline and an employee. Then on Thursday, federal investigators placed the blame squarely on Plains, finding, among other failings, that its inspection tools did not accurately detect the extent of the pipe’s corrosion.

My first reaction was, “No kidding … I guess pipes corroded to the thickness of a piece of paper were a giveaway, huh?”

My second reaction was, of course, to thank the repair guy.

The repair guy is the unidentified pipeline worker who decided to get his presumably routine maintenance of Line 901 finished just after midday on May 19, 2015. Before he could get to work, he called Plain’s Texas pipeline dispatch and asked it to temporarily shut down the flow of oil from offshore fields in the Santa Barbara Channel.

No sophisticated sensor or switch or command system stemmed the oil — it was likely a guy in khaki Carhartts and clueless about any spill. We all owe him a beer.

That break kept the spill to an estimated 148,000 gallons of crude, a moderate amount considering this pipeline can transport 2 million gallons a day.

An estimated 80,000 gallons from the pipe pooled next to the Pacific Coast Highway, with at least 60,000 gallons accumulating on or near Refugio Beach. The beach caught about 15 semi-tankers worth of goo — about 0.01 percent of the amount involved in the 1969 Santa Barbara spill.

Documenting the harm has been complicated by our ocean waters just entering a new era of transition that includes emaciated pinnipeds (seals, sea lions) and disappearing numbers of ocean invertebrates (sand crabs, etc.).

Still, we have documented harm among the sand-dwelling critters of the coast, and acute economic harm across Santa Barbara, Ventura, and Los Angeles counties, with people spending less money at beaches more heavily hit by tar balls than at those untarred or lightly tarred.

We’ve also seen longer-term economic ripples as drillers like Venoco declare bankruptcy partly due to the indefinitely shuttered pipeline. Some estimates place the ultimate liability to Plains All American at $250 million.

Through the mess, the Joint Incident Command proved a dismal communicator; a bureaucratic morass often deaf to the concerns of sister agencies and the public, and not nimble enough to take advantage of sophisticated spill-moniting tools.

Our polling shows this acted to further erode public confidence in our government’s ability to respond to such disasters in a timely, open manner.

Through all this, I’m still thankful to that repairman for making that call. Now if I can just get his phone number, I have a few beers here.

Sean Anderson is a professor of Environmental Science and Resource Management at CSU Channel Islands. You can follow oil spill observations made by Channel Islands’ Sandy Beach Rapid Assessment and Aerial and Aquatic Robotic Research Groups via Anderson’s blogs at oil.piratelab.org and aarr.piratelab.org.